Sarah Gayler finished playing basketball at Norman High School in 2004 where she was a regional and area champion, state qualifier and selected "Big All City" in Oklahoma's top 6A conference.
In 2006 she attended the University of Arkansas - Fort Smith and acquired her Associates in Arts while on a full basketball scholarship. Here they were Conference and Regional Champions along with the National Consolation Champions.

Once fulfilling her Associates degree, she attended the University of New Orleans, a NCAA Division I school, on a full basketball scholarship. There she acquired her Bachelors degree in Business Management. After college, Sarah kept on playing the sport that she loved so much, while also coaching at Carrollton Christian Academy. There they went undefeated in their Conference, along with winning the Regional Championship. 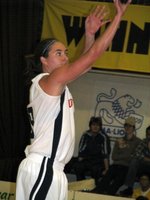 After graduating in 2008 she earned a contract to play internationally in Holland. Unable to leave for the opportunity, she was invited to play on a tour team in Budapest, Hungary. Once Sarah returned from playing internationally, she began her Training Career. While her training career advanced, she also played 2 years of Semi-Pro ball in Texas with the Dallas Diesel Women’s Team in the Women’s Blue Chip Basketball League where they were National qualifiers.

In 2010-2011 she worked at Velocity Sports Performance and Athletes Performance where she was a Strength and Conditioning Coach for NFL, MLB, FIBA, and Collegiate athletes.

In 2011-2012 she worked as a Certified (CI-CPT) Personal Trainer.
From 2010-2013 she worked for the NBA Developmental League - Texas Legends. She was the athletic trainers assistant and assisted in all the practices and games.

In 2012-2013 she was the Co-Head Coach of the ABA's North Dallas Vandals. She operated as Head coach on all of the away games, as well as solely planned and conducted the teams practices. The Vandals were also the ABA Championship Finalist during this 2012-2013 season with Coach Gayler. During this time, over 20 players were recruited to play internationally.
From 2012-2014 she ran the entire Dallas Diesel Basketball Men’s program. While running the men’s program, she solely scouted, recruited, ran practices, coached games, ran player development, scheduled games, acquired sponsors, updated press releases, spoke at community engagements, and much more. Four of the men’s players received contracts to play internationally. During this time from 2012-2013, she also solely ran an AAU girls program. In the summer of 2013 all 8 of her Senior players to play in College with scholarships.

From January 2014- May 2017 Sarah coached as the Head Assistant Coach with the ABA/PBL Shreveport-Bossier/Kentucky Mavericks. They have won four national championships, were two time undefeated ABA National Champions and National Championship game participant. For a season working with the Mavericks, she was able to use Sportscode Pro.

After attending the Orlando and Las Vegas Summer Leagues for multiple years, in 2017, 2018 and 2019 Sarah was invited to work with the Summer League- Las Vegas.  Also in August 2017 she began working with Milt Newton, Assistant GM of the Milwaukee Bucks, at his camp, 'Emerald Gems Foundation' in the Virgin Islands and was invited back for both 2018 and 2019 sessions.

​In 2018, she attended the Washington Wizards Training Camp.

In 2019, Sarah began working with the Jr. NBA-India as an international coach. She directed coaches academies, skills challenges, camps, clinics, tournaments and tryouts all over the country. In scouting, coaching and actively managing each event, she was able to evaluate and help grow basketball in the country.

​Sarah continues to work independently with select athletes in Strength and Conditioning, Player Development and Coaching.